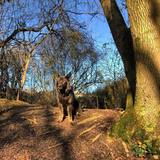 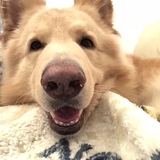 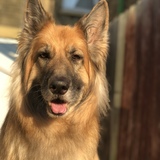 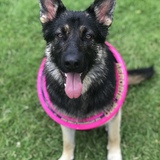 All the German Shepherd Dog pack

Draco is a very misunderstood bundle of nerves and love. He didn’t have the best start in life but despite this he has progressed leaps and bounds. He barks when startled and because he is a big black dog, this can put people off. He really craves attention despite his nerves and if he is made to feel safe, you will have made a friend for life. He cannot tolerate cats and he will chase them. He has also not been brought up around children, and something about them seems to make him edgy. He has never shown any aggression towards people or children, but they can make him bark. He is best suited to somewhere with a fenced garden. In the evenings he likes to sit next to you like a human and lick your hand. He is a soppy mess and his loyalty is unfaltering to anyone who gives him a good scratch. Despite Draco’s barking - which can be silenced with “hush” or “come here” he really is a special dog. Full of empathy, he steals everyone’s hearts.

Draco has yet to receive opinions from dog sitters on Gudog.